Simple Future or Going to

Future events can be expressed with either Simple Future Tense or the ‘going to’ expression. Both of them express future events and actions but there is a small difference in usage. The main difference lies in the probability of the event. For predictions, less probable events, we use Simple Future and for already planned future events, we use ‘going to’. ‘Going to’ is generally used to express future intentions or plans or it is often used if we can see the evidence of a future event. For example,

I don’t think it will rain. –> Look at those clouds! It’s going to rain very soon!
Maybe the test will be easy this time. –> The teacher says the test is going to be very difficult.

When to use Simple Future

The Future Simple Tense is the simplest ways to express a planned action in the future in the English Language. The future tense is expressed by using the auxiliary verb ‘will’ which is followed by the first form of the verb. The auxiliary verb implies that the action will take place in the future. Note that there is no need to conjugate ‘will’ or the main verb following it

Take a look at where Simple Future is in the Verb Tenses Table: 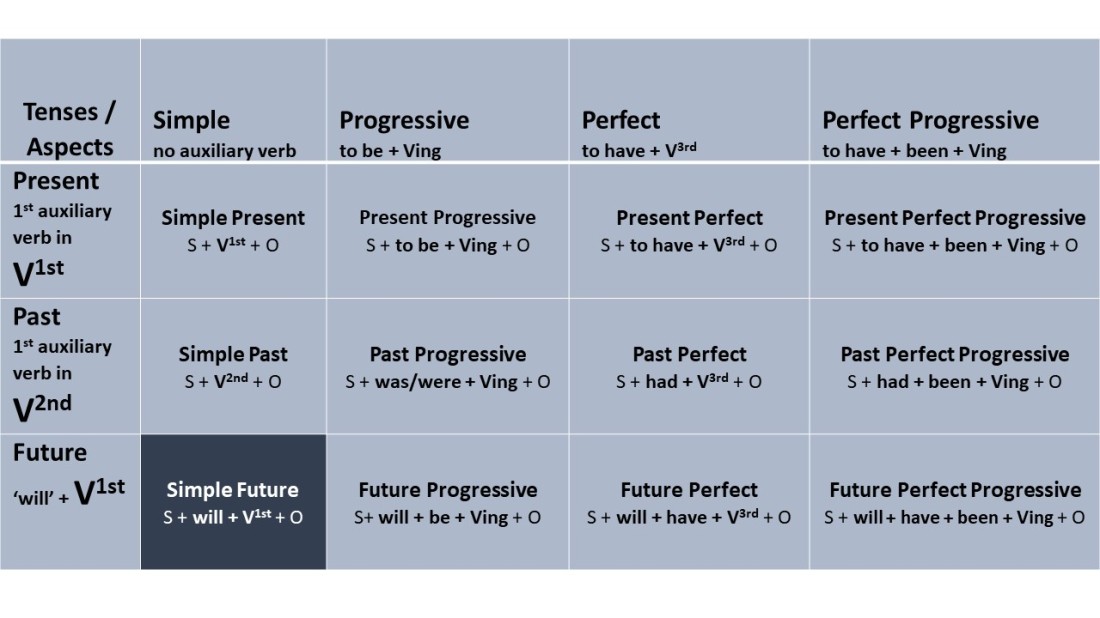 As in case of any other tenses, you need to combine the auxiliary verb and ‘not’ to create the negative form. The short version of ‘will not’ is ‘won’t’. Remember to use the short version in an informal and the long version in formal context. The negative of the Simple Future is formed as follows:

Subject + won’t / will not + bare infinitive

Examples:
I won’t study for my exam.
She won’t come to the cinema with us.
We won’t go to the beach today because it’s very cloudy.

In the English language, questions are usually formed by switching the (first) auxiliary verb and the subject. For example:

The same logic applies in Simple Future, as ‘will’ is also a modal verb like ‘can’ in the above-mentioned example. Just switch ‘will’ and the subject.

I will come to your wedding. → Will you come to my wedding?

Who will you come to my wedding with?

What time will they have breakfast?

Where will your cousin travel around?

Note that in time clauses beginning with while, when, before, after, by the time, as soon as, if and unless, the correct form of the verb is in present tense.

Expressing planned actions with ‘going to’

Planned actions in the future can be expressed by using the expression ‘going to’, as well. However, ‘going to’ is not a tense. The full form of the expression is ‘to be going to’ where ‘to be’ needs to be conjugated according to the subject of the sentence. The actual action verb stays in first form, following ‘going to’.

Affirmative:    Subject + conjugated form of to be + going to + bare infinitive + Object

‘Going to’ is generally used to express a planned action in the future. If you want to say that you have already decided on doing something, use ‘going to’. For example,

I’m going to the movies later today.
He is going to run the Boston Marathon this year, so he needs to train so much.
Are you going to invite your mother-in-law for the baby shower?

That branch is about to break. He’s going to fall off the tree!
The company earnings dropped by 30% in the last quarter. Share prices are going to decrease dramatically.
He isn’t going to pass the final exam. It’s so hard!

Expressing future with shall

You might have seen the auxiliary verb ‘shall’ before. It can also be used to express future instead of ‘will’. But be careful because ‘shall’ can only be used with ‘we’ and ‘I’. It is frequently used in formal, contexts such as legal documents and contract. For example,

The tenant shall be responsible for the cleaning of the whole property.

However, there is another meaning of ‘shall’. It is commonly used in polite questions with a similar meaning as ‘may’. For example,

Note that ‘shall’ here refers to the politeness, not the future.

One thought on “Simple Future Tense”